Luke G. Williams examines the 1805 showdown between Henry Pearce and Jem Belcher – a titanic struggle that forms the thrilling climax to the upcoming feature film ‘Prizefighter’ …

It’s the stuff that sporting legends are made of – a championship fight between two men, both with valid claims to the title. One is a beloved champion of the past, who only lost his crown after an enforced absence, while his dynamic opponent has been hailed as the new champion. Just to make the contest even more enticing, both pugilists are undefeated, while the contrast in their styles is acute – one being a graceful master boxer and the other a tenacious slugger.

Most boxing fans would unhesitatingly identify the above scenario as a description of the 1971 ‘Fight of the Century’ between Muhammad Ali and Joe Frazier. However such a description equally applies to a largely forgotten contest which took place 166 years earlier – namely the bare-knuckle showdown between James ‘Jem’ Belcher and Henry ‘the Game Chicken’ Pearce, which took place in December 1805 for the Championship of All England (and effectively, therefore, the world – England being the only country where competitive prize fighting was then established).

Like Ali, the elegant Belcher was the finest and most graceful boxer of his day. His remarkable life is now the subject of a feature film entitled ‘Prizefighter’, produced, written by and starring Matt Hookings, a Welsh actor with a first-class pugilistic pedigree himself – his late father having been David ‘The Bomber’ Pearce, the former British Heavyweight champion now immortalised in statue form in south Wales and known as ‘Newport’s Rocky’.

Hookings explained to Boxing Social why he views Belcher as such a significant figure in boxing history. “I remember reading a treatise on boxing that Jem wrote,” he said. “It’s one of the only pieces of writing that survives containing his words. Reading it you could see he was a man way ahead of his time. He was someone who was really smart and scientific in the way he approached boxing. He was all about using his jab and using his speed, agility and technique rather than what everyone else was using which was brute strength and power. And what he achieved in his youth was incredible.”

As dramatised in ‘Prizefighter’, Belcher hailed from Bristol, with boxing as important to his family as oxygen – Jem’s grandfather was former champion Jack Slack, while his brothers Tom and Ned also boxed. Even Jem’s sister was said to have taken part in a prize fight. In ‘Prizefighter’ Slack is portrayed by legendary actor Russell Crowe, who lends the role his customary grizzled charm, while Ray Winstone plays the trainer who helped Belcher develop his unique style, Bill Warr.

As Hookings intimates, Belcher was a teenage prodigy – indeed, when he defeated Andrew Gamble on 22 December 1800 to become recognised as Champion of England he was just 19 years, eight months and seven days old – nine months younger than Mike Tyson when he annexed the WBC Heavyweight Championship from Trevor Berbick in 1986.

Famed Georgian boxing wordsmith Pierce Egan summed up Belcher’s meteoric rise thus: “He was considered a perfect phenomenon in the gymnastic art – a mere boy, scarcely twenty years of age, putting all the celebrated heroes of the Old School at defiance.”

“He achieved so much so young,” Hookings adds. “His life was dramatically transformed from one of poverty in Bristol to being a wealthy champion in London while still a teenager. You see that journey in our film.”

Yet today, Belcher’s name is unknown to all but the most conscientious of boxing historians. “He is a true forgotten hero,” Hookings emphasises. “That’s sometimes the nature of history – you can be a huge name in your own time but then fall through the cracks. There were other names from the bare-knuckle era who have remained more prominent – Tom Molineaux, Tom Cribb and so on – so I could have gone and made a film about one of them but the way that Jem revolutionised the sport really resonated with me. His was the story I really wanted to tell.”

Hookings is correct, for in terms of skill and style, Belcher was indeed a pugilistic revolutionary. His speed, for one thing, was unrivalled, Pierce Egan describing his lightning punches as “severely felt but scarcely seen”, while his quicksilver foot movement, which enabled him to move smoothly in and out of range of his opponents, pointed the way to modern boxing techniques that we now take for granted. Belcher was so ahead of his time that when his rivals were “placed in competition with his peculiar mode of fighting,” Egan declared that they found themselves “completely baffled”.

As well as his sporting prowess, Belcher’s dashing looks also won him countless female admirers. Cobbett’s Weekly Political Register emphasised his heart-throb status, noting that: “[There is] scarcely a female Saint … who would not, on her way to the conventicle, take a peep at him from beneath her hood.” Like a Georgian era David Beckham, Belcher was also a style guru, with his penchant for wearing a coloured neckerchief leading to a trend across England for discerning gentlemen to sport such items, which were promptly renamed ‘belchers’ in Jem’s honour.

In contrast to many of his pugilistic contemporaries, several of whom were little more than glorified thugs, Belcher also possessed a gentlemanly manner, with Egan describing him as “good-natured in the extreme, and modest and unassuming to a degree almost bordering upon bashfulness”.

In June 1803 though – when Belcher was at his wondrous peak – tragedy struck.

Jem had recently defended his title for the fifth time and was unwinding with a game of ‘rackets’ at an indoor tennis court in central London when he “received so violent a blow from a ball … that it literally beat one of his eyes out of the socket”.

Such was the inflammation arising from Belcher’s injury that the sight of his other eye was also briefly threatened. Although the prospect of total blindness was eventually averted, Belcher was in no condition to box, and promptly retired. To console him for the loss of his beloved title at the peak of his powers, several of his wealthiest admirers set him up as a publican.

In retirement, Belcher began grooming a friend from his Bristol days named Henry Pearce to be his successor. Nicknamed the Game Chicken, due to his spirited nature and diminutive nickname of ‘Hen’, Pearce was a cheerful but illiterate brawler who had demolished a series of tough guys in the southwest. A consummate showman, the Chicken would celebrate his victories with an extravagant somersault – an act he perfected nearly two centuries in advance of Prince Naseem Hamed.

Having cut a swathe through the West Country fight scene, Pearce – on Belcher’s promptings – travelled to London, lodging for free with his kindly mentor prior to his London debut, a vicious room contest against former Belcher victim Joe Berks that ended with the Chicken triumphant and Berks’ blood being mopped off the walls.

Having pocketed more than 100 guineas for his victory, Pearce promptly returned to Bristol without so much as a thank you to the disgruntled Jem, who began to nurse a dangerous grudge against his former friend.

Two years later, in October 1805, Belcher was among the spectators when Pearce, in a thrilling and savage 64-round contest against John Gully, succeeded in winning a fifth straight fight since Jem’s retirement, reinforcing widespread recognition of him as the new champion.

As Pearce received the acclamation of a rapt crowd, among them the future King William IV, Belcher was unable to contain his envy any longer, brusquely interrupting the Chicken’s celebrations by announcing a comeback and challenging Pearce to settle the issue of who was champion once and for all.

The spectators lapped up the absurd melodrama of the one-eyed Belcher’s unexpected challenge, and, for the next month, the Fancy, as boxing fanatics were known, worked itself into a lather of excitement. The Napoleonic Wars were raging but, in the approximation of the Cumberland Pacquet newspaper, the bout between Belcher and Pearce was “of more interest than a battle won or lost by France or Austria”. 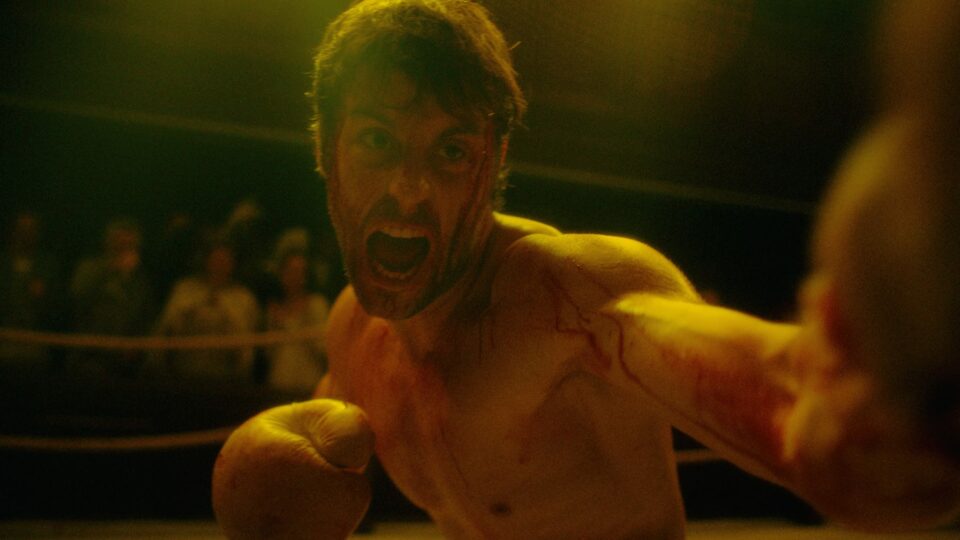 Belcher let it be known that he was so confident of his superiority that he would gladly fight Pearce in a “saw-pit” for free if necessary. However, the “gentlemanly patrons of pugilism” decreed that the fight should not be “for fame alone” and a mammoth stake of 1,000 guineas was duly assembled, a sum considered “proportionate” to Belcher and Pearce’s “distinction in the science”, according to Bell’s Weekly Messenger.

The date for what Bell’s labelled a contest between “these two tried pugilistic Champions of England” was set for Friday 6 December. Many were sceptical that Belcher could overcome the handicap of losing his sight in one eye, and the final pre-fight odds had Pearce a narrow 3-2 favourite.

At midday on 6 December the hype finally ceased and the two men strode to meet each other.

What ensued was a historic contest marked by savagery, skill and almost unbearable pathos.

It is therefore no surprise that the Pearce vs Belcher fight has been appropriated by Hookings as the rousing dramatic climax of ‘Prizefigher’.

“It was a brutal fight,” Hookings explained. “It’s the climax to the film. In making it, we’ve gone all out and – I believe – way past any fight scene that has ever been seen or put on film – I can say that with my hand on my heart.

“Forget ‘Rocky’! Forget ‘Creed’ – while playing Jem I had a real fight with a real former boxer in Ricky [Chaplin, who plays Henry Pearce]. The first actor to play Pearce dropped out because it was too real. When you watch the fight the punches Ricky and I exchange are real.

“I was buzzed several times during filming. My ribs were broken, Ricky’s ribs were broken. We had a real fight. I broke my nose and I’m still suffering from tendonitis in my elbow.”

Some dramatic licence is taken in ‘Prizefighter’, with Belcher and Pearce fighting clad in gloves rather than with bare-knuckles, a symbolic nod to the sport’s eventual future evolution that Belcher did so much to create through his fame and renown.

However, the savagery and intense violence of the original contest are preserved. “We wanted it to be the most epic fight possible and make it as real as possible,” Hookings concludes. “That’s how I wanted the film to end – with something bloody and violent and spectacular which had the brutality that boxing of that era possessed.”

In case, dear reader, you don’t know what happened in the Belcher-Pearce fight I won’t reveal the outcome.

Instead, I suggest you avoid spoilers and wait to watch ‘Prizefighter’ when it is released via Amazon Prime on 22 July, leaving it until then to discover whether Jem Belcher succeeded in regaining his coveted title or not.

‘Prizefighter’ is released on Amazon Prime in the UK and USA on Friday 22 July.

Gareth A Davies On Fury-Joshua: ‘It Looks Like They’re Backing Out Of It’