Where do we start after that epic night at the Jeddah Superdome?

Well, how about with the positives. We have to give both Oleksandr Usyk and Anthony Joshua extraordinary credit for their performances. AJ really showed up. He put his heart and soul into the fight and really tried to win against a guy in Usyk who is an absolute master craftsman.

Joshua imposed himself better this time than in the last fight. He fought a strong fight and showed an ability to adapt his tactics and pick his shots better. With that in mind, I think post-fight AJ has been beating himself up unnecessarily.

He has fought two great fights against a pound-for-pound master. Great fighters and sportsmen never want to lose, but this wasn’t a fight that he should look back on with anything other than pride. If he had lost to someone who was no good, or wasn’t in his class, then fair enough.

Arguably that’s what happened when he lost to Andy Ruiz Jr. But that was not the case here. He was up against a real fighter, a real pro, a highly conditioned and gifted athlete in Usyk.

As for Usyk, I think he showed once again that he has a plan for whatever fight or fighter or strategy he comes up against. As much as AJ did well, Usyk showed what a high-quality performer he is. He was a clear winner, and he showed the championship heart and incredible stamina and virtuosity that we all know he possesses.

That said, I was disgusted by the scorecard of Glenn Feldman, who made Joshua a 115-113 winner. That card was an insult to boxing. A despicable scorecard. He wasn’t just one round out, he was miles out in his assessment of the fight. How on earth could he give Joshua five of the first six rounds? To say nothing of the fact he also gave AJ the 12th and final round. That’s insane!

It was a horrific scorecard on his part. If someone performed that badly in their job in any other walk of life apart from boxing, they would never work again. Ever. If this judge is not reprimanded in some way then it’s a total embarrassment.

The WBA, IBF and WBO have to make it clear that sort of scorecard will not be tolerated. To get such a bad scorecard in a fight that was that epic, that good, was a real mood killer. And just because the right man still won the fight on a split decision, that scorecard should not be overlooked.

A scorecard like that only has two explanations: you took money, or you’re incompetent. If there is enough integrity in the sport to show that you did not take money, then you are clearly incompetent and not worthy to be a judge! Either way, a judge like that has to be out.

That’s all I’ve got to say about that scorecard. I’d rather focus the rest of this column on the fight, so let it be said that one of the most extraordinary features of Usyk’s display was the way he rallied after a tough ninth round to take the fight back to AJ in the tenth and sweep that and the 11th and 12th rounds too.

I think people thought Usyk was hurt more than he actually was in the ninth. Sure, he was hurt, and AJ landed some good shots but he realised AJ was going for it and knew he had to weather the storm and let it pass and that’s what he did.

When Usyk came back to the corner at the end of the ninth he was fine. He was very coherent and solid. He walked straight back to the corner without difficulty, I hit him with the ice water spray and he reacted great to all the instructions he was getting.

He had a monster throwing bombs at him for three minutes and he had weathered it beautifully – if he had tried to fight back or come back swinging at that point in a round he had probably already lost then he could have left himself open and been in even more danger.

That was a good strategy because I think the effort AJ made took the last gasp of wind out of him. Usyk made him expend as much energy as he could in that round so that instead of giving further momentum to AJ it sapped him of energy.

Usyk then jumped all over him in the next round to show he was right back in control of the fight and won the last three rounds big and that’s what great champions do.

Before the final round Usyk was very calm. As you may have seen on TV he was talking to himself in the corner, he was praying, he was visualising what he was going to do, imagining how the last round was going to go.

After the fight Usyk told me in the ring that his hands, which I wrapped, felt perfect and that the gloves I had made him through my company Rival were “the best”. That was very satisfying to hear. He was really happy and I was delighted with that. 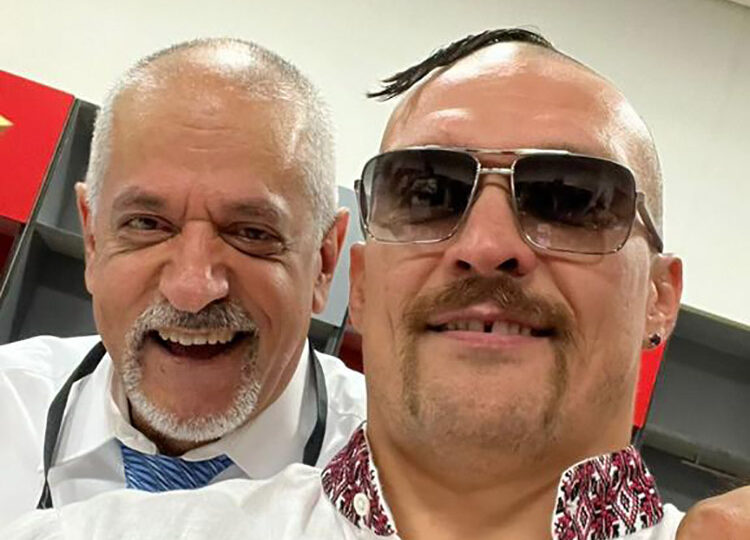 It was pretty chaotic in the dressing room after the fight. A big celebration, the Saudi Prince came in. The sort of circus you would expect after the fight. Usyk was hurting, he felt fine and it was a great night and a great feeling to be part of Team Usyk for the tenth time in a row.

Now all the attention turns to a potential fight between Usyk and WBC champion Tyson Fury. I have to say that the respect I had for Fury before last night has almost completely evaporated in the wake of his reaction to the fight on social media and the disparaging way he spoke about Usyk and AJ.

As far as I’m concerned that was an attempt on his part to steal their thunder and stay relevant and I was disgusted by it. He has no class to be talking in that manner about two guys who fought their asses off. He knows better than that! He has spoken about respect often in the past! It’s a very poor way for a man who is the WBC champion to be talking.

Will the Usyk-Fury fight happen? I don’t know. I’m not 100 per cent convinced to be honest. I get the feeling that Fury may price himself out of it or low ball Usyk out of it. I don’t think it will be an easy fight to make, that’s for sure.

But make no mistake, if the fight is made Usyk can absolutely win it. He’s such a special fighter.

Eddie Hearn On Fury Vs Joshua: ‘As Far As We’re Concerned The Fight’s Off’

Canelo Reveals ‘Most Spectacular’ Knockout Of His Career