In a relatively quiet Saturday night for boxing the biggest fight by far is Gervonta “Tank” Davis defending his lightweight titleagainst Rolando Romero at Barclays Center in Brooklyn.

Tank is a big favourite in the clash of undefeated fighters, both with KO-puncher reputations. He’s 1/8 (-800) at Betfred. If you feel like taking a chance on the somewhat crude but dangerous challenger, “Rolly” Romero is available at 5/1 (+500).

Don’t want to lay the big price on Tank but aren’t sure that Romero has what it takes to upset the odds? Let’s see what is being offered on the proposition market.

Of all the various props available across the betting industry, the “over 6.5 rounds” (basically an even-money bet) could be the way to go.

While Tank has undoubted power, he doesn’t always get opponents out of there early. Three of his last four fights went long. There was the 12th round stoppage of a faded Yuriorkis Gamboa, the 11th-round KO over Mario Barrios and a full-distance 12-rounder against Isaac Cruz. If Tank feels a sense of danger he might choose to box carefully in the early rounds.

In fact, Davis’ weight of 133¾lbs is his lightest since the Leo Santa Cruz KO win in October 2020 and might indicate that he plans to do some boxing and moving rather than staying in the pocket with Romero.

I see value in playing the fight to reach the second half of round seven at evens.

This should be a fun fight, however long it lasts. There can be little doubt that Romero is really “up” for the fight. He seems confident to the point of being cocky. Tank is the more talented, with superior hand speed. His boxing skills are perhaps a bit underrated.

We don’t know the level Romero can reach. He’s undefeated, after all, although his unanimous decision win over Jackson Marinez was questionable. On paper, Romero looks a bit outclassed, but I don’t think he will go out easily, and Tank’s southpaw stance might not be a factor, considering that Romero easily handled lefty Anthony Yigit in his last fight.

Of course, the danger in taking an “over” bet when you get two heavy hitters in the ring, each capable of hurting the other, is that lightning could strike at any time, but I do think this one will go at least six-and-a-half rounds.

What about other bets?

“Distance — No” is a high-price ticket at 2/11 (-550). Too high for me. Sometimes, these fights that look certain to end early end up goingthe distance. (Look at Yoelvis Gomes vs Jorge Cota and Alen Babic vs Adam Balski last weekend, for instance.)

Erislandy Lara defends his WBA middleweight title against Spike O’Sullivan (pictured below, right) on the Tank vs Rolly show and this is a contest I never saw coming. I guess O’Sullivan is being rewarded for a game effort against Jaime Munguia two years ago, when he surprised a lot of people by lasting into the 11th round. Lara was last seen blowing out the hapless Thomas LaManna in the first round. We know that O’Sullivan will be taking the fight to Lara and trying to bully him and wear him down to the body. Cuban southpaw sharpshooter Lara has the long-range skills to outbox Spike. 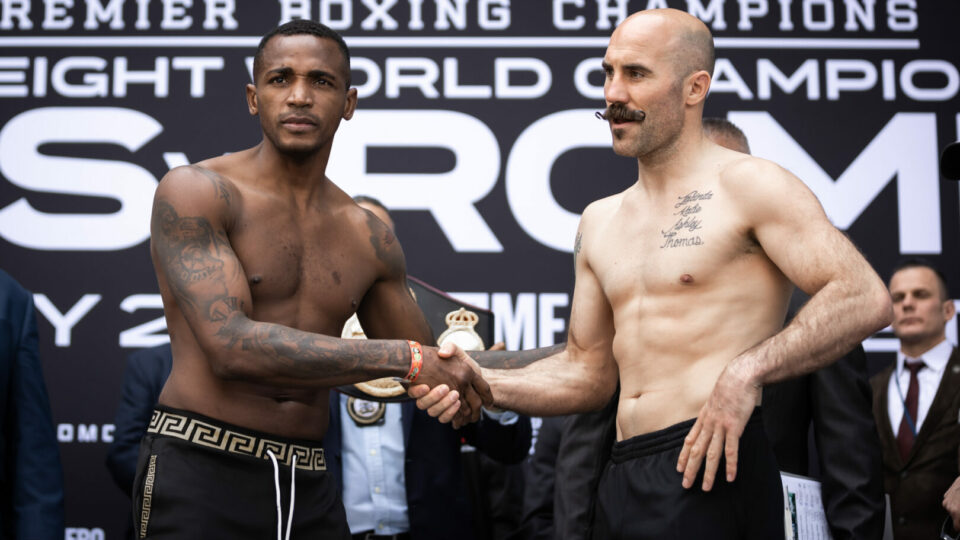 These are ageing fighters. Lara is 39, O’Sullivan is 37. I’m wondering if we’ll see Lara planting his feet and trying to hurt the colourful Irish battler. We think of Lara as a safety-first fighter but he can hurt opponents when the mood takes him. He’s actually knocked out two of his last three opponents.

It wouldn’t surprise me to see Lara digging down and teeing off on O’Sullivan and maybe getting him out late in the fight. The Lara KO/TKO proposition is priced quite high at 4/9 (-225), though.

If you think the fight plays out like Lara’s win over the earnest but limited Greg Vendetti, the Lara decision proposition at about 5/9 (+180) might appeal. But, who knows what we’ll see from Lara? (Or from O’Sullivan, come to that.)