On the weekend we saw heavy-handed 154lbs prospect Yoelvis Gomez extend his unbeaten record to 6-0 in a step-up fight against Mexican veteran Jorge Cota.

And something that seems to have gone under the radar last weekend was the pro debuts of six Cuban national team members on the same show in Mexico.

But the standout talent of all the Cubans boxing professionally is surely David Morrell (6-0, 5 KOs), who holds the WBA regular 168lbs title.

The emergence of talented Cubans can only be a good thing for pro boxing. And as regards the pro debuts in Mexico, it’s as if Cuban boxing has come full circle. As we all know, Cuban leader Fidel Castro banned professional sports in 1961, after a communist regime was established on the island. Leading boxers were obliged to defect in order to continue their careers.

Now the Cuban authorities are allowing the nation’s leading amateurs to pursue pro careers. As I understand it, the government will allow the boxers to keep 80 per cent of their purses. It’s perhaps not a perfect arrangement for the boxers but it’s a lot better than it was. At least the fighters can now support their families and loved ones back home.

Great Cubans of the 1960s included Jose Napoles, Sugar Ramos and Luis Rodriguez. There was the ill-fated Benny “Kid” Paret, middleweight banger Florentino Fernandez and Jose Legra, who was based in Spain.

What of the new wave?

Even though Yoelvis Gomez was taken the distance for the first time last weekend there is no doubting his potential. And it wasn’t a bad performance to win every round against Cota, a seasoned pro who used his greater experience to survive. But Gomez almost got the stoppage, with the referee visiting the Mexican’s corner after the eighth round to tell them he’d stop the fight unless Cota made a better showing.

Gomez, 24, is based in Las Vegas, where he trains under the practised eye of fellow-Cuban Ismael Salas. He’s a gym mate of featherweight Robeisy Ramirez, the two-time Olympic gold medallist who has been looking good after a disappointing pro debut.

When we think of the “Cuban school” we think of slick boxers who hit and don’t get hit, but Gomez is an aggressor who looks to hurt his opponent from the off.

Prior to the Cota contest, Gomez had blown out four opponents in the first round and one in the third. This included a one-round demolition of Clay Collard, who had the reputation in both boxing and MMA circles as one tough son of a gun. Cota, however, was able to cover up and keep moving, and he was clever at rolling with punches when he was backed up on the ropes. It was a good learning fight for Gomez and the upside was that he maintained a steady pace from rounds one through 10.

Meanwhile, David Morrell (pictured below, left) is a boxer who seems to have it all. Like Gomez, he is a southpaw. Morrell can box, move and punch, and he’s fast and smart. He was a World Youth and Cuban national champion. Morrell has relocated to the midwest state of Minnesota. He went the full 12 rounds in only his third pro bout when he outclassed fellow-lefty Lennox Allen — unbeaten going into the fight — to become WBA interim champ at 168 pounds. Now he’s the “regular” WBA champion. One has the feeling that we won’t be seeing Morrell extended until he’s matched with one of the top fighters in his weight class. 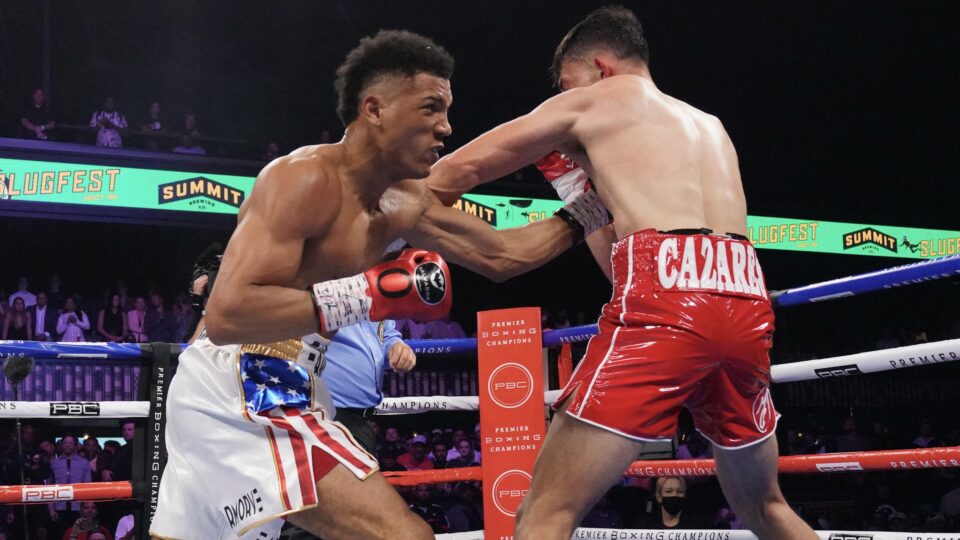 As for the Cubans who won in Aguascalientes, Mexico, on the weekend, Arlen Lopez, the two-time Olympic gold medallist, gave the most spectacular showing. Lopez, boxing in the light-heavy division, dropped the overmatched Fernando Galvan with a left hook to win in 94 seconds. It was one of those face-first knockdowns and Galvan needed medical attention before he could leave the ring. Lopez is 29.

Southpaw stylist Lazaro Alvarez, three-time world amateur champion and three-time Olympic bronze medallist, cruised through six rounds against a willing opponent in Francisco Mercado, who had a 6-1 record and was coming into the bout after having beaten Fabian Maidana, Marcos Maidana’s kid brother. But Alvarez was dominant, boxing with hands down by the fourth round, making it look easy. He’s turning pro late at 31. But he’s a fresh 31. Alvarez boxes in the 130lbs division.

Roniel Iglesias is another southpaw, and another late entry into pro boxing. At 33, he doesn’t have a lot of time. The Olympic welterweight gold medallist in Tokyo (and earlier a gold medallist at the London Games in 2012) was matched against an opponent on a seven-bout winning run in the 24-year-old Brandon Perez. If Mexican fans hoped to see Iglesias tested they were disappointed. Iglesias won easily, delivering a left to the body from his southpaw stance to crumple Perez in the second round.

Julio Cesar la Cruz, two-time Olympic gold medallist and five-time world championships gold medallist, was fed a fall-guy from Colombia named Delvis Casseres in a cruiser mismatch. It was all over, predictably, in two rounds, with the Colombian going down easily.

Yoenlis Feliciano Hernandez, middleweight gold medallist at the world championships, and, at 24, one of the younger Cubans to turn pro in Mexico, scored a fourth-round KO against an opponent with a 3-0 record.

And 26-year-old Osvell Caballero, a Pan American Games gold medallist, got off to a winning pro start with a fourth-round KOagainst an opponent who had won three of his last four bouts.

Obviously, the elite-level Cubans can be fast-tracked as professionals. Some of them could probably be matched against world top-15 opponents right now.

This Cuban surge could include unbeaten heavyweights Frank Sanchez and German-based Jose Larduet and undefeated 168-pounder Osley Iglesias (runner-up to Arlen Lopez in the national championships and who has been boxing in Germany and Poland).

There are potential champions here, maybe potential stars. But which ones will make it all the way? It will be fun finding out.