Billy Joe Saunders, a one-time opponent of Chris Eubank Jr, says that he shouldn’t have ‘wasted everybody’s time’ in the wake of Eubank’s father announcing that he is calling off his son’s fight with Conor Benn.

Despite all the promo, one of the most intriguing fights of the year was thrown into doubt today. It was reported that Eubank Sr has pulled his son out of a clash with Conor Benn – citing a dangerous weight cut as the reason.

Nigel Benn was surprised at the sudden change of plans, Conor Benn has had his say, and now so has another fighter. Saunders, who beat Eubank Jr in 2014, unsurprisingly has no sympathy to offer. He took to Instagram in light of the news.

“Benn is giving age, experience and weight away, so if Eubanks can’t be disciplined to lose the extra few pounds he should not have wasted everybody’s time. Simple. Get the [weight] made and get in the ring and fight.” 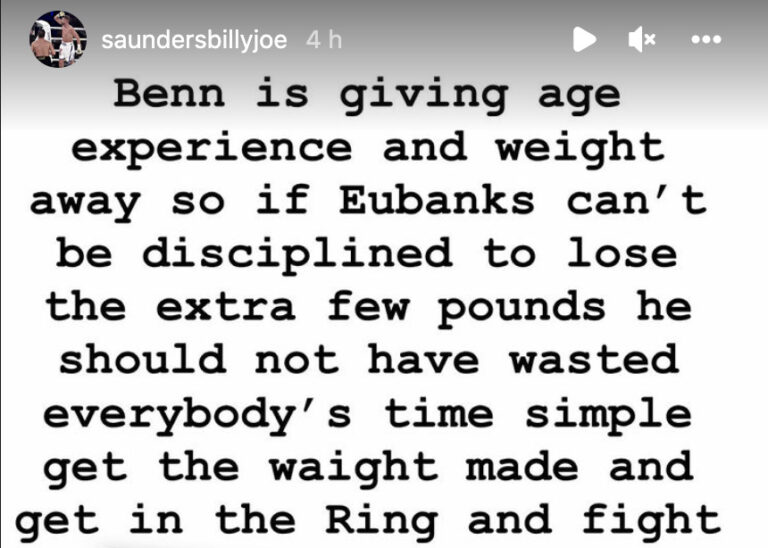 The catchweight is set at 157 lbs, meaning Eubank Jr will have to drop down to a number on the scales he claims he hasn’t seen since he was a teenager. The potential negatives of this have been major talking points, and it appears Eubank Sr isn’t having it.

Referencing the traumatic death of his son, Sebastian, Senior has refused to put another one of his boys in danger.

The one man who can provide clarity is the one man who hasn’t commented on the situation – Chris Eubank Jr. It’s unclear if he’ll respect his father’s wishes or go ahead with the fight that has already sold out the O2 in London.